Dark Side Of The Sacred Star 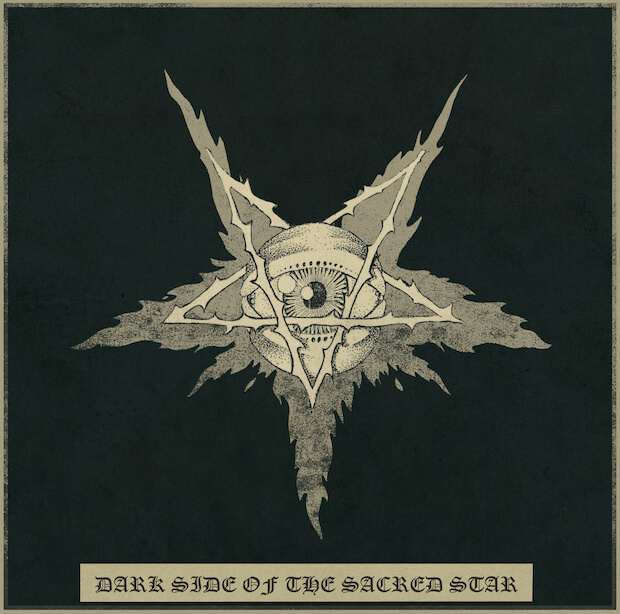 A VERY SPECIAL COLLECTION OF EXCLUSIVE TRACKS FROM SOME OF THE GREAT BLACK METAL ARTISTS OF THE CURRENT PEACEVILLE ROSTER & SOME NEW ACTS,  COINCIDING WITH THE 35 ANNIVERSARY OF THE LABEL RELEASED ON 9 DECEMBER 2022 ON NUMBERED VINYL.

Peaceville presents a very special collection of tracks from the more black metal-oriented acts on the label, featuring a variety of brand new signings, recent bands amongst the firmly established legendary acts and influential names, with plenty of great showcases for what is to come on Peaceville in 2023, and also the LP includes a lot of exclusives!

This pressing of ‘Dark Side of the Sacred Star’ is presented on limited numbered vinyl.

A new and (for now) exclusive track recorded for this release from the early Norwegian scene legends. The unmistakable eerie synth sounds and sinister riffs of mastermind Steinar Sverd Johnsen (Arcturus) supplies the magic, with Marius Vold’s snarling layers of grimness narrating proceedings.

An exclusive treat of what is to come in this new chapter for Vltimas and former Mayhem guitarist Blasphemer, AKA Rune Eriksen. Harking back somewhat to the ‘Wolf’s Lair Abyss’ period of Mayhem for its inspiration, and featuring Blasphemer himself on vocal duties as well as guitars, delving into deeply spiritual and voodoo themes, this is the taste of a new brutal storm of darkness looming.

The Norwegian masters return with their stellar ‘Astral Fortress’ opus, proving that the flame is burning as strongly as ever for Fenriz and Nocturno, for this blackened old heavy metal epic of creeping riffs.

A special alternate vocal take of the track featured on latest opus, the highly-revered ‘Shiki’, Sigh continue their eclectic and multi-layered journey through the weird and the wonderful world of blackened metal.

Doedsmaghird – Then, to Darkness Return

The more grim and malevolent twin to Dødheimsgard’s current deep labyrinthian explorations of existence, this is the birth of Vicotnik’s new accompanying project, with a devastating and unrelenting attack of primal black metal, bringing to mind the work on his own ‘Satanic Art’ era of Dødheimsgard.

A very special demo version in instrumental form, of a new track to kickstart the next leg of Kvist’s legacy, over 25 years since their one and only studio album ‘For Kunsten Maa Vi Evig Vike’ made its mark on the world as a highlight of mid-90s atmospheric and melodic black metal.

An exclusive and new track recorded at the same time as Mork’s recent new album studio recordings, this is also a fine taste of the kind of evolution to be found on the next Mork opus, coming early 2023. Atmospheric, melodic and at times near-anthemic black metal excellence.

A new track from the upcoming and highly awaited studio album from the influential and long running Italian legends. Stunning high calibre blackened occult heavy metal in Mortuary Drape’s distinctive style showing why the revered Italians have deservedly been at the forefront of the genre for decades.

The name may not be familiar to many just yet, but this new band of known musicians out of Darkthrone’s original hometown of Kolbotn delivers some prime raw and evil sounding black metal, with an old school sound and execution, and riffs straight from the depths of hell’s cauldron.

Scotland’s Hellripper continues its ascent towards the pinnacle of the blackened thrash/speed genre, and as the new album heads towards an early 2023 release, here is a special and exclusive 2022 rendition of the classic ‘Mephistophelian Dreams’, recorded for this release. Hyperspeed dark and dirty heavy metal delivered to perfection.

A spellbindingly epic and hypnotic new track recorded especially for this release, exuding the grand finesse and demented nightmarish states from the twisted genius of Vicotnik, with its DNA also including some unused material originally created for debut ‘Kronet til Konge’.

A crushing outro from the enigmatic creator of Thorns and one of the main figures in creating and expanding the sound of 1990’s black metal, included here with this refined 2022 mix of the ‘Helvete’ theme.