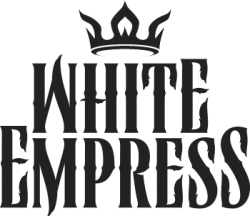 Formed by guitarist Paul Allender – previously of UK titans Cradle of Filth, this new venture under the moniker of White Empress exudes the depth and ferocity of his prior work whilst pushing new boundaries. Paul’s signature razor-sharp riffing & epic, melodic twists and turns compliment the sumptuously alluring & often demonic voice of Mary Zimmer (Luna Mortis) to create a masterclass in savage yet uplifting metallic darkness.

WHITE EMPRESS IN THE PEACEVILLE STORE

When Paul relocated to the USA in 2012, in between working with Cradle of Filth, he decided to start work on another project with local musicians in his newly adopted home of Minneapolis, and with his friend, Martin Skaroupka from Cradle of Filth, this soon became White Empress.Read More

Paul Allender says, “White Empress is the link the music scene has been so desperately missing. The band started writing together two years ago, and have slowly crafted the sound that is White Empress. White Empress has all the best parts of the metal scene rolled up into one band. The music is hard, but emotive. White Empress’ unique style and sound is bringing fresh life to the music scene that it’s been crying out for.”

Their first release was the EP ‘White Empress’, which garnered great press and radio coverage.

After this, the band have moved on to their first album, entitled ‘Rise Of The Empress’. This has been recorded in White Empress’ studio and has been mixed and mastered by veteran producer, Kit Woolven (Thin Lizzy, Cradle of Filth) and is set for release on Peaceville Records, 29th September 2014.

“It might have looked like smoke to those who hadn’t been there…but it was steam. Steam rising from the still-wet wounds of the fallen, scattered across the fields. It mingled with the collecting dew and filled the air with a rank, pungent aroma.

The smell of a new era.

The Warrior stirred, managed to get to his knees, and then, pushing with an iron hand on the dank ground, to his feet. His eyes scanned the scores of dead, searching for his weapon. A smile crept across his face.

Strong, victorious, he strode to the edge of the wood. All along the treeline, first one here, then one there, a new member of the new race emerged. They nodded to each other, knowing this was the dawn they’d waited for.

The marriage of man and machine had birthed them into a future where they held within them all the capacities of both.

Against the rising sun, a silhouette loomed, and he knelt at her feet. He turned his face up, and swallowed his knee-jerk revulsion to her monstrous flesh…

Aluminum coils, laced through her skin, held her form together here and there, the sacrifice she had coldly made to achieve majesty.

All color had left her except for the dried clots of blood, which clung insistently to the holes left by the stoic stitching, begging her to remember a humanity she had marshaled, a mortality… she’d eschewed.

The ink pools of her eyes surveyed her subjects, as one by one they bowed before her. Her glittering irises assessed them, counted them- dismissed them.

What she’d done had been for the cause- not them. If they proved loyal, they might live to see the third moon. If not- only the Warrior would be spared.

Wiping the last of the battle sweat from her lips, she took his weapon and knighted him- the first, the last, the best… into the reign of the White Empress.”

The band already have fans in the press from their EP:

Dom Lawson – Metal Hammer – UK “Further proof that Paul Allender is one of the foremost masters of infernal riffs and atmospheric filth in metal today, White Empress wield old school grandeur and haunting, arcane extremity like gleaming weapons of sonic refinement. Dark, diverse, lissom and wickedly infectious, theirs is a sound that oozes freshness while dragging us ever deeper into the depths of Hell…”

Malcolm Dome: Total Rock, Classic Rock – UK “Really impressed with the tracks. They combine an eerie choral atmosphere with a full-on, scathing metal attack. The musicianship is intricate yet ferocious, and the vocals have the delicate web of intrigue.”

Aldo Mancusi – Brutal Crush – Italy “Devastating, Deadly, Extreme! Three words to define the sound of these guys. A war machine that wounds the listener to death with riffs forged in hot metal, drum rhythms that will rip out your guts and the ear-melting screaming. Excellent!”

Tarja Virmakari – Metal Shock – Finland “When I heard the first WHITE EMPRESS demo tracks at the end of summer 2013, I was absolutely amazed! It’s not possible to compare their music to anything I have heard before. At one point I thought I heard something that reminded me of a song, but right in the next instant new atmospheres filled my mind. There were rich riffs, drum blasts, gut-tearing clean vocals, along with growls and screaming, which proved my assumptions to be wrong. WHITE EMPRESS is new, fresh and hypnotic,  something that has to be experienced personally. This band is surely one of the greatest sensations of 2013 and I cannot wait to see what 2014 will bring from the WHITE EMPRESS camp!”