One of the pioneering industrial black metal forces to emerge in the early 90’s, Mysticum brought to the world a completely unique brand of extreme & psychedelic discordant black metal with insane drum machine patterns & synths. They were originally signed to Euronymous’ Deathlike Silence Productions label, such was his belief in the band (Mysticum even featured Hellhammer from Mayhem in their line-up for a brief period). However, this venture proved to be cut short following his death, forcing Mysticum to look elsewhere for the release of their eventual debut album, ‘In the Streams of Inferno’, finally surfacing in 1996. 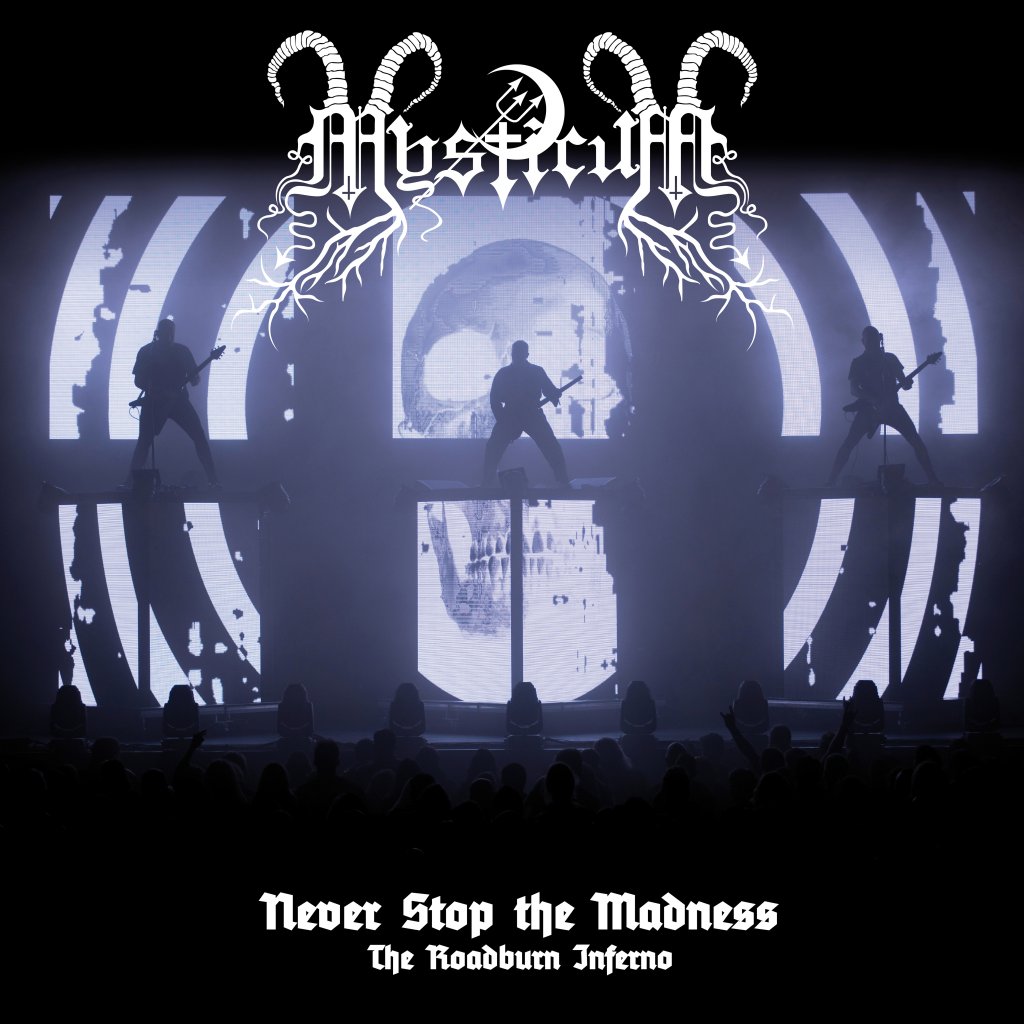 A perfect concoction of cold, primitive black metal & forward-thinking ideas, Mysticum has had a lasting & profound impact on many since the 90’s, and so when the long-awaited follow-up album, ‘Planet Satan’, surfaced in 2014, these godfathers of the scene rightly returned to reclaim their throne, following a long period of inactivity.

In light of the release, Mysticum decided that a return to the stage would be the next logical step, but it had to be done THEIR way, without compromise; and so, with Herr General Cerastes, Dr Best & Svartravn stood upon three 3 metre high podiums surrounded by screens, with one of the most intense light and sound spectacles witnessed at an extreme metal show, Mysticum stuns the crowd into submission, as captured here at the famous Roadburn Festival in the Netherlands, with this CD/DVD package featuring live material from both ‘Planet Satan’ & ‘In the Streams of Inferno’ for a night of sheer hell.

January: “Wintermass” is released. It represents something completely new. A different way of making Black Metal that is has never been heard before. With a cold and depressive sound and computer programmed drums and sounds.

April: In order to have a more proper and fitting name, they change from Sabazios to Mysticum.

June: Mysticum once again enters Rolf’s Cellar studio to record the second demo called “Medusa’s Tears”. Included in the recording is a new version of the song “Mourning” (that originally appeared on the “Wintermass” demo). Mysticum re-writes it and gives it a new and different refrain, but for some reason, they decide to omit this song on the “Medusa’s Tears” demo.

July: “Medusa’s Tears” is released. Euronymous from Mayhem and Deathlike Silence Productions (DSP) is totally amazed when hearing the two demos in the car, while traveling to Bergen to record the infamous “De Mysteriis Dom Sathanas” album. He had never heard anything like it before. It was totally new and original (he told). Euronymous signs Mysticum to DSP immediately and plans for the release of the debut album “Where the Raven Flies” are done, hence flyers are sent out within the underground scene announcing its coming.

August: Euronymous is brutally murdered by Varg Vikernes from Burzum and because of his tragic death, the release of “Where the Raven Flies” never happens and the album is put on hold for a while.

October-November: The mighty drummer Hellhammer of Mayhem joins Mysticum, but it does not work out according to expectations, as Mysticum is nothing without the industrial drumming coming from a computer. With a human drummer, the music becomes more alive, more human and that is like destroying valued art! Thus, Hellhammer quits after half a year or so, getting replaced with the drum-machine once again.

June 14: The infamous Ulver/Mysticum 7″ split-EP is released by Necromantic Gallery Productions in 1000 copies. Mysticum contributes with the new (and earlier omitted) version of the song “Mourning”. It is released for the first time on this EP, but it is heavily mastered compared to the omitted version. Very few people have ever been able to hear this song in its first form and sound. Throughout the years, this EP has become really expensive and collectors are offering high amounts of money per copy.

February: Mysticum enters Bondi studio to record two songs for the “Nordic Metal – A Tribute to Euronymous” compilation-CD. The songs are “Kingdom Comes” and “In Your Grave” and the sampler gets released by Necropolis Records later the same year.

April: Mysticum signs a record deal with Full Moon Productions and the recording of the debut album takes place shortly after. Not entitled “Where the Raven Flies”, as initially planned, Mysticum renames it to “In the Streams of Inferno” instead.

June: The promotional tape “Piss Off!!!” is released, containing 5 songs intended for the “In the Streams of Inferno” album. The songs are either of an early mixing process, or even pre-takes of the versions later used (as history is a bit unclear on this matter), but they’re not properly mastered at this moment. As a consequence, “Piss Off!!!” becomes a great taster on the new direction and sound of the band, as well as a promotional-tape for the still cursed and unfinished debut album.

August: The recording of “In the Streams of Inferno” is finally finished, but in typical Mysticum-style, the band manages to use half a year (or so) to send the master tape to Full Moon Productions.

September 24-October 19: Mysticum successfully tours Europe together with Marduk and Gehenna and 24 gigs are played in 25 days. A brand new and unheard song called “Eriaminell” (Here I Am in Hell) is introduced to the audience and it quickly becomes a classic.

On October 17, the show in Bradford, UK, is filmed by a fan with an amateur camera. Later on it gets a transfer to DVD-R. A primitive bootleg version of it is still circulating among fans and on the Internet.

November 9-30 (circa): Mysticum travels to the USA on what they believe is a 3-weeks’ tour together with Cannibal Corpse, Immolation and Angel Corpse. Unfortunately, Mysticum only gets the chance to play two shows during these three weeks, due to economical obstacles. Again, one of the shows (in New York) is filmed by a fan with an amateur camera. A VHS bootleg version of it is still circulating among fans and on the Internet.

May: In cooperation with Mysticum, Planet Satan Revolution (PSR) gathers all the band’s old material (except the “In the Streams of Inferno” album and most of the stuff from the “Piss Off!!!” promo). The intention behind this effort, is to release this legendary material on CD format for the first time, however, the old master tapes are gone. Consequently, a decision is made to remaster everything directly from the old cassette tapes and EPs. Considering the effort in question, the result is pretty awesome. This leads to the decision of entitling the new effort as “Lost Masters of the Universe”.

The band members come together to start the writing process for the long-awaited ‘Planet Satan’ album & sign with Peaceville Records for this title, plus fully remastered & updated editions of both ‘In the Streams of Inferno’ & ‘Lost Masters of the Universe’.